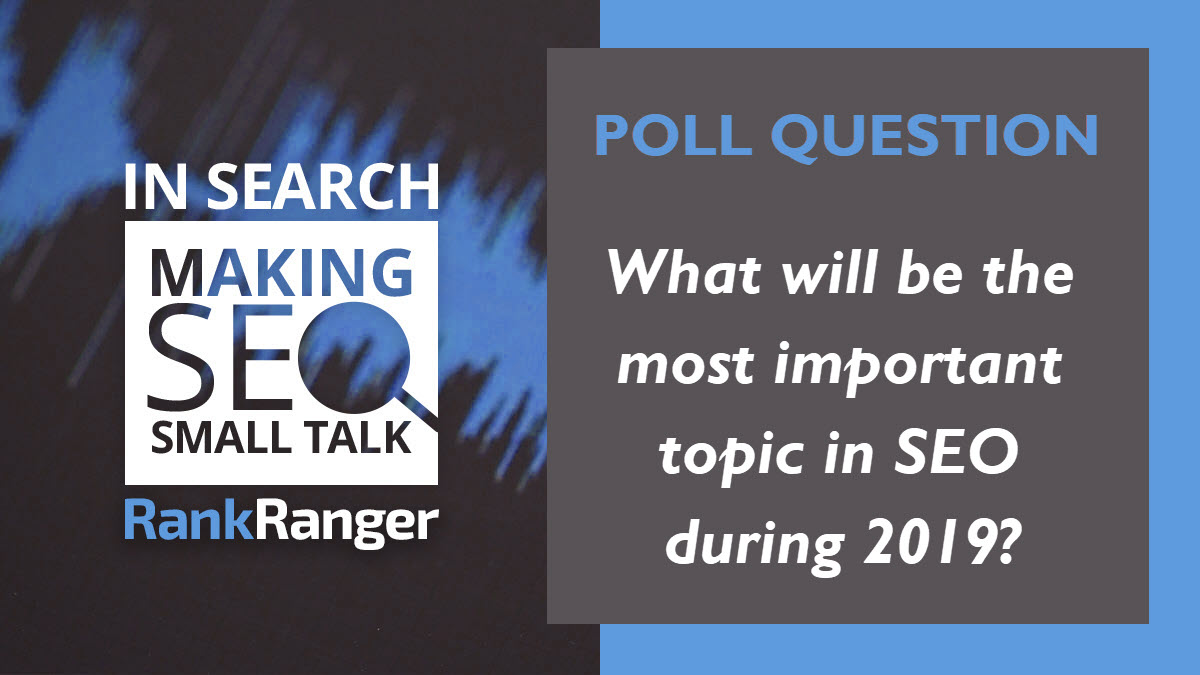 Let us know what you think the most important topic in SEO will be in 2019! Will it be mobile? Local? Voice search? User intent? Let us know so that we can feature you on the next episode of In Search!

Summary of Episode 09: The In Search SEO Podcast 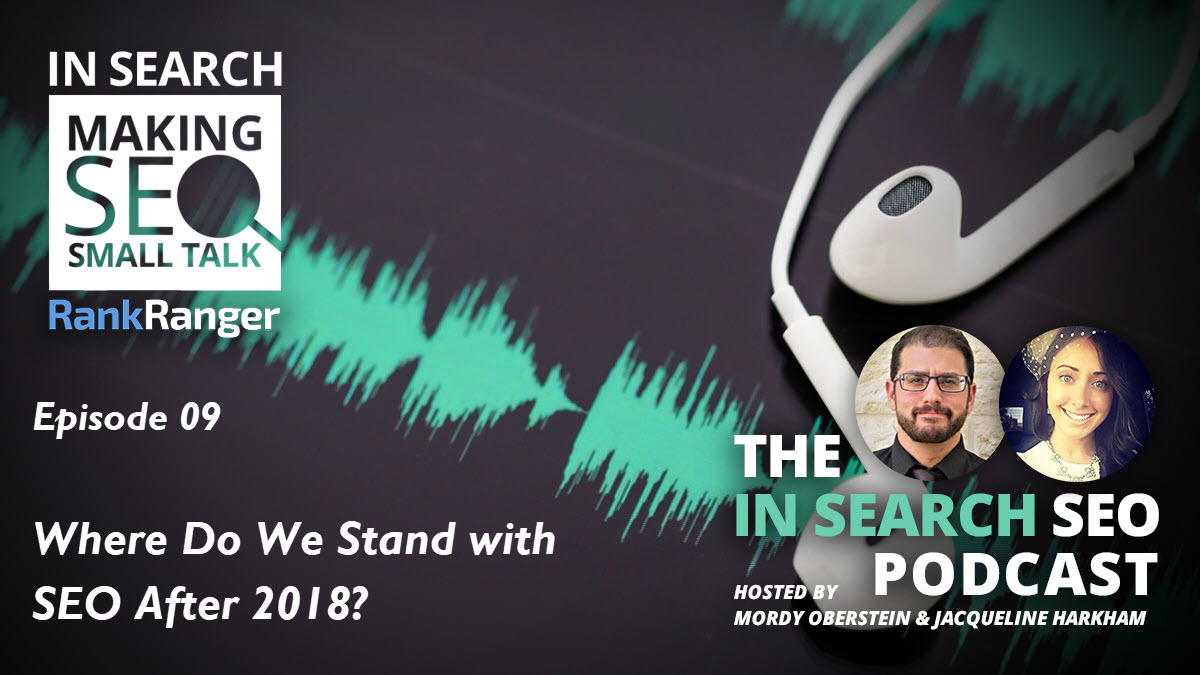 This week our hosts Mordy Oberstein and Jacqueline Harkam reflect back on SEO in 2018:

Considering everything that happened in SEO during 2018, what three developments have had the biggest impact on search? According to our hosts, the following were the top three “SEO events” in 2018:

Coming in at number three is the “Medic Update”, the August 2018 update that impacted YMYL (Your Money Your Life) sites. Why is it number three on our list? Because according to some (including our own host) when Google updated its Quality Rater Guidelines to emphasize user safety on YMYL sites, they weren’t just guidelines but reflected some new algorithmic abilities. Meaning, it appears to us that during the Medic Update Google was profiling sites according to their core intent and demoting any sites with conflicting profiles. For example, a site that is portraying itself as a helpful content site that in reality is a subtle but strong e-commerce site.

Now, even if you don’t agree with the notion that Google can algorithmically accomplish some of what it asks its quality raters to do (as many do not agree), our hosts still list the Medic update as the third most important development of 2018. Why? Simply because of the amount of discourse the update fostered around Google’s algorithmic capabilities (and the fact that the update was undeniably massive).

Google has been testing no-organic results searches on the SERP for specific queries for a while. After shelving the initial run of zero organic
SERPs, Google brought them back to mobile in November whereupon they announced that zero organic
SERPs are here to stay for a limited number of queries. Mordy explains that this connects to voice search and Google’s broader plan. How? By being the sole provider of content, Google changes a user’s mentality to align to voice search as their primary source for answers. That is, having a SERP with just a Google property creates a new association to Google, one where Google is the provider of the one true answer, much as they are on voice search! For more on this topic and why Google chose to limit zero organic SERPs to mobile, check out episode six of The In Search SEO Podcast!

Back in September 2018, Google made a slew of announcements at its
event. Without going into all the changes, the gist is Google came out with their new philosophy of search as a “journey” which will entirely change the way we think of search. Search as a “journey” refers to the overall process of a user finding an answer to their query. That is, Google is not only concerned with the current query but what the user ultimately wishes to accomplish (i.e., over the course of multiple queries). This means that Google is taking a new approach to search, whether it be new features or what is shown in those features, such as the custom mobile Knowledge Panels. Search as a “journey” also means potential changes to where URLs might show up both within SERP features and as part of the organic results. If Google now sees any given search as one step in an overall process, as one step in an overall journey, that changes everything.

In a search environment where Google is redefining its outlook on search, it’s more important than ever to have a firm grasp on the underpinnings of SEO. Mordy, while of course valuing SEO tips, suggested that the industry may be too focused on technical fixes and not focused enough on what is driving search. That is, while tips can be of great help in isolation, a tip here and a tip there won’t help you when developing an SEO strategy. Forming an SEO strategy demands
a directional understanding of search.

That is, where is Google going and what are they trying to accomplish? You could say, the difference between someone who does SEO and someone who knows SEO is the latter knows what is happening directionally. As Google gets deeper into its search as a journey philosophy, it’s going to be exponentially more important to understand the bigger picture of what’s going on and not just isolated SEO tips.

Google, in the past, has used all sorts of techniques to target multiple user intents. However, search as a “journey” is meant to consider not just multiple intents per se, but rather where the user wants to go, what their ultimate objective is via search. Search as a “journey” is more than a spirited targeting of intent. Search as a “journey” goes one step further by predicting intent. That is, what users will need in order for their search journey to continue seamlessly. This means giving users access to content that would lead them to the next step in their search’s overall aim right there on the initial SERP. Currently, the best method that Google has at its disposal for doing so is the placing of such content within SERP features. Our hosts, therefore, expect to see more content paths placed within SERP features throughout 2019.

A great example of where Google is already
user behavior would be “Reserve with Google” in the Local Pack. A user searches for a (decent) restaurant, Google then predicts their next step by offering an opportunity to book a table right there in the Local Pack. Meaning, Google knows the next step a restaurant goer may want to take is to make a reservation… so it offers the user the chance to do so right there on the SERP!

As much as this is a cliche, there are big changes coming and coming fast. According to our hosts, 2019 is going to see a fast-paced move towards providing users access to their search journeys. Due to the scope of this task,
is set to change rapidly and in unexpected ways in 2019.

NBA All-Star Voting with Google: Users can now go to Google and vote for their favorite NBA players for the upcoming All-Star game and events. This is interesting as the element was a sponsored partnership, not a new and “natural” SERP feature. Can we expect more sponsorships like this to come in 2019?

Go Directly to Featured Snippet Content: It appears that Google has a new feature where if you click on an AMP based Featured Snippet in mobile search, Google could jump you down to a specific section of content as well as highlight that content. Our hosts believe this is bad for site owners as users will most likely not be interested in viewing the rest of the on-page content. Furthermore, users may miss important CTAs contained on the page.

DuckDuckGo Go Go!: Looks like 2018 was a great year for DuckDuckGo, they recently posted on Twitter that they surpassed 9 billion searches for the year and they seem pretty confident that they will exceed those numbers in 2019. DuckDuckGo’s focus on privacy comes at the perfect time with Google and Facebook having appeared before Congress about the very issue. There has been an awakening to privacy concerns in 2018 giving DuckDuckGo some serious momentum going into the new year.

In the article “How Popular is Voice Search” Adam Heitzman of
offers some great data on how users interact with voice assistants. Due to its comprehensive nature (which Mordy noted is rare for voice search studies) our hosts believe this is one of the best and most informative pieces of voice search research they’ve encountered.

Being as the article was so comprehensive here are some highlights for you:

#1: There was an 11 percentage point jump in 2018 of voice assistant users who engaged the device because it was a fast way to find information. This shows an increase in users wanting quick and easy information. The problem is, Google is pushing for deeper content and a more engaging voice search experience. However, this data tidbit may imply that users are just not interested.

#2: The study looked at what types of queries voice device users ask. Coming as no shock, 40% of people used it for directions. This would make advertising harder than it already is for voice search. Who would want to hear a 30-second
when they’re lost while driving in their car?

Similarly, 33% of users employed a voice device for weather queries and 24% to find a business. However, once you get to more involved queries (doing a calculation, news, recipes, movie times) the numbers drop off pretty considerably. From this study, it doesn’t look like users are looking to voice search for complex issues. It could be because users don’t trust the devices yet at that level or they are not interested in deep engagement from a voice device. This is not the way Google wants things to go. As mentioned, Google wants to create more engaging experiences via its voice assistants.

#3: A concerning statistic was that 36% of users engaged a voice device to ask a fun question (i.e., What color shirt am I wearing today? Is Skynet going to take over the world?). This is concerning because people may be taking voice devices as a novelty and not as a truly helpful and essential device. And as with most novelties, usage will inevitably decline.

Picking up from 2018, the duty to come up with a fun and interesting send off question fell on Jacqueline, who asked:

If Google could speak… whose voice would it have?

Jacqueline went with the wise old Yoda. A great choice. Mordy went with either Ray Ramono, Steve Buscemi, or Danny DeVito. Three people who are the total opposite of what Google should sound like. Wouldn’t it be interesting to hear either of these voices coming out of your Google Home device?

Lastly, heads up as big new Rank Ranger release is coming in the near future! Keep on the lookout for the announcement!