Whoa, Nelly! It’s here, mobile first indexing! However, that wasn’t the only shocker. Do you hear that sound? That’s the sound of Google confirming an update to their core algorithm! We’ll take a hard look at these big ticket items and all of the notable changes and tests Google ran in the merry month of March.

The Arrival of the Mobile-First Index 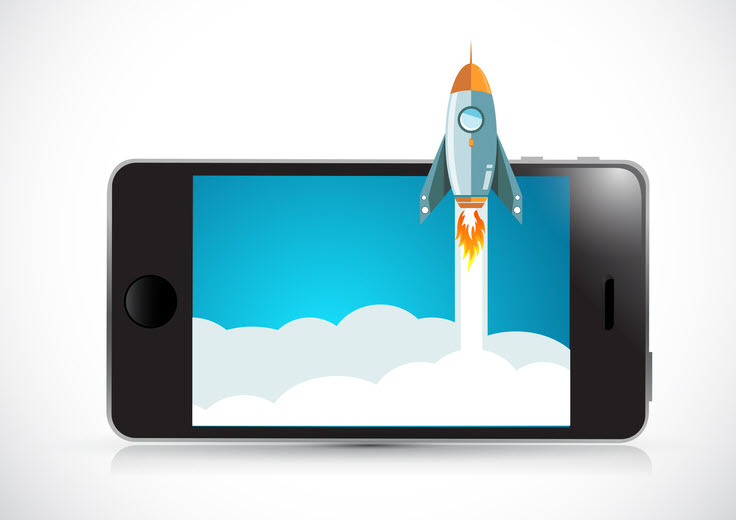 On March 26th Google announced that it was rolling out the mobile-first index. After much anticipation, it’s finally here. On March 21st, a solid five days before Google’s announcement, we posted that there were some major changes to the underpinnings of both the mobile and desktop
SERPS, and that all signs pointed to the imminent release of the mobile-first index.

Long story short, per our data, Google released the framework for the mobile-first index on the 21st. Five days later Google made the announcement that they were starting to switch sites over to its mobile-centric index.

Before I jump subjects, I just want to answer one question: Is the mobile-first index the next Mobilegeddon? No. Not in any way. In fact, Google has insisted that most rankings won’t change. Glad that’s settled.


Google Updates Its Core Algorithm… And Confirms It!

Is it just me, or are Google’s update roll-outs longer than they used to be? This time we’re talking about a 14-day monster than ran from March 3rd (my birthday) all the way through March 16th! According to our Rank Risk Index, the rollout peaked on March the 9th as the index caught fluctuation levels just shy of 100 on
desktop (by the way, the index only goes up to 100).

What makes this so unique, other than fluctuation levels at 99 on
desktop (92 on mobile), was that Google actually confirmed this one! Taking to Twitter via its newest spokesperson, Danny Sullivan, Google showed its cards on March 12th. In Danny’s “official” announcement he noted that there was an update and that pages who saw a drop in the rankings may, in fact, be quality pages with nothing wrong with them.

SERP Feature Changes, Tests, and All that Jazz on the March SERP

Some seriously big, alarming, and interesting tests and changes found their way to the Google SERP. March saw Google and the industry overall venture into some truly uncharted territory.

When I was a kid the local batting range had a “giant mouth” hanging there in
right field with the phrase kiss it goodbye (as in a home run for those who couldn’t care less about baseball). You never expected it to happen, but here and there someone would rip the ball far enough to “kiss it goodbye.” That’s what I feel happened last month on the SERP. We all talk about the impending doom of all things organic on the SERP, but nothing truly cataclysmic ever happens, until it does.

On March 13th (that’s right, the same time as the core update hit), the industry was set ablaze when we all saw this: 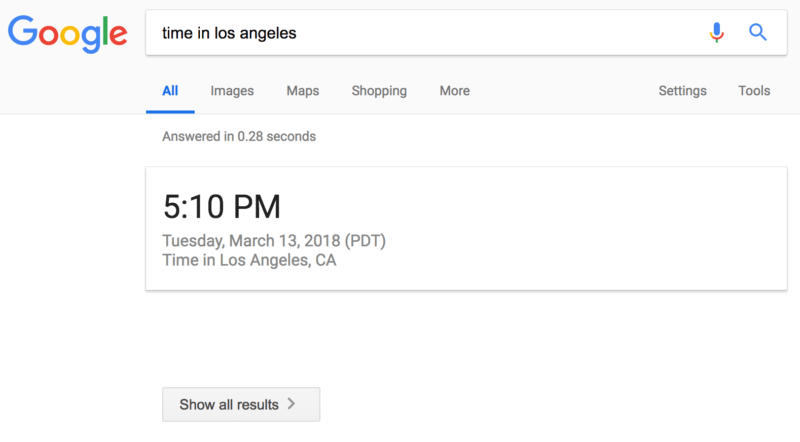 
For certain queries where there was a simple and direct answer (i.e., math equations, unit conversions, etc.), Google had decided to forgo all organic results and just offer you the answer. That’s not to say you could not access organic results at all. Rather, such results did not initially appear, but were accessible via a button that
read “Show all results.”

After a week, Google reversed course and abruptly stopped showing direct answers without organic results. (By the way, Google did again test its limited organic SERPs on mobile just 3 days after doing away with the zero result SERP…. hmmm.)
Spokesman for all things Google, Danny Sullivan, tweeted that Google had already accumulated enough data (and had received enough feedback) to end the “test”:

Update! We have enough data and feedback — which is appreciated — to conclude that the condensed view experiment should stop for now. The team will look at improving when and how it appears.

Of course, what data is Google talking about? Well, the only data that one could collect in such an instance would be how many times users clicked to see the actual organic results. Why would Google care about that? Well, can you think of an instance where the only answer a user receives is via Google and only Google? More on this in the next few weeks hopefully. 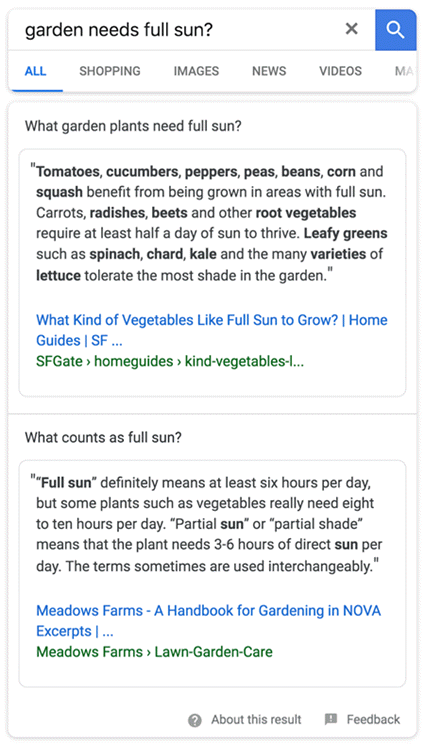 March’s Updates to the Knowledge Panel

It’s that time again. Time to go through all of the changes and tests last month saw to Google’s Knowledge Panel.

First things first. Google is now including a special icon within the Highlights section of the mobile Knowledge Panel designed to indicate if a business is led by a woman:

If you run such a business, you can activate the icon within your Google My Business account.

Musicians Get Google Posts within the Knowledge Panel

Google has given musicians access to implement Google Posts within the Knowledge Panel. OK, this does not apply to your 48-year-old cousin who still plays dive bars on alternating Tuesdays. Rather, any musician who has a Knowledge Panel can now show Google Posts in their panels on the SERP.

Around mid-March, a new look for the Local Panel on mobile was spotted. First, instead of the traditional blue used at the top of the panel, Google has opted for a cleaner look by forgoing color and using “SERP white.” The other big change is that the icons (Call, Directions, Save, & Website) have been placed within circles against the white background.

I still see this version showing up at times, which makes me think Google may in fact fully roll this version out at some point. Overall, I like it, it’s a more seamless design that is easier on the eyes.

By the way, you’ll notice that the restaurant shown in the panel above seems to be part of the Reserve with Google program, as it has what I like to refer to as the “Booking Button.” I’ve only seen this feature appear for salons, yoga studios, etc. I’ve never seen this show for restaurants before. After a bit of digging and asking around, it seems that no one really had either. The most I found was that it was being shown in France since mid-March. That aside, if you go to the Reserve with Google page you will notice a new partnership with Bookatable (see below). 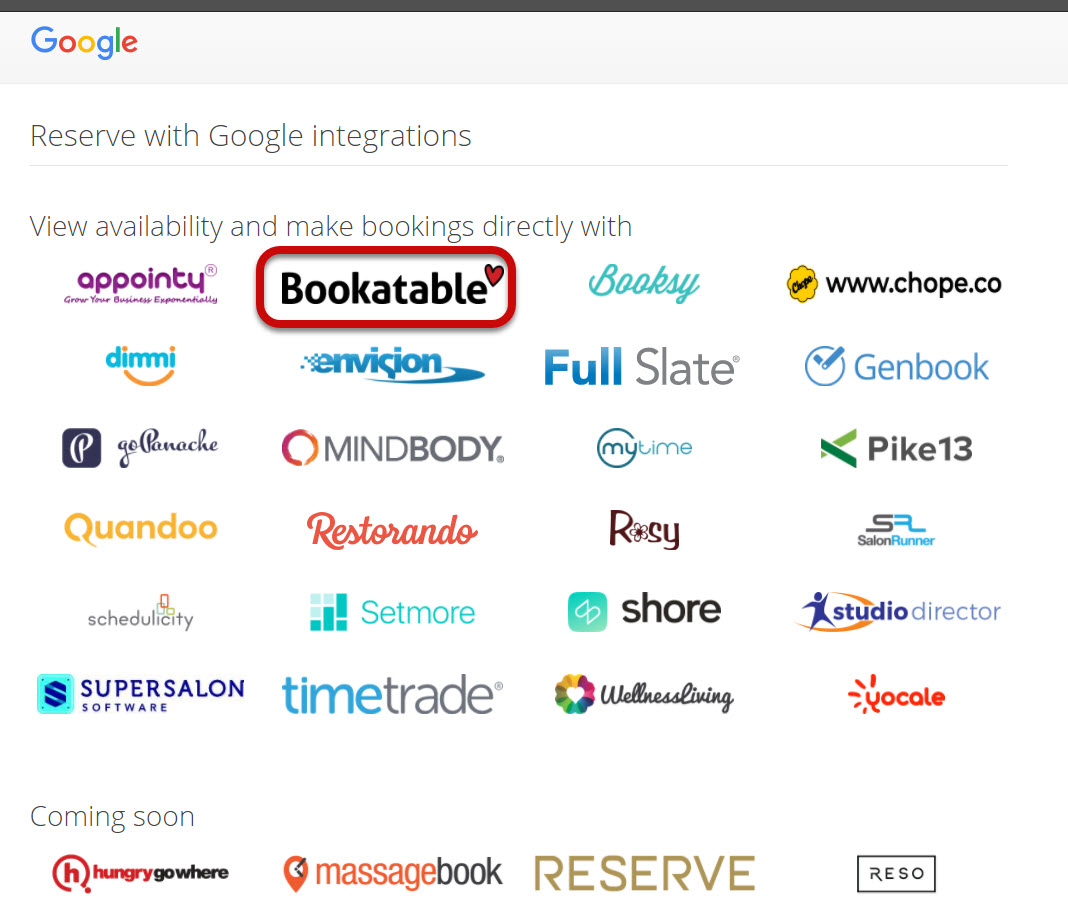 Bottomline, if you have a client who operates a restaurant, or if you are the owner of a restaurant yourself… you now have the ability to allow users to book a table right from the Knowledge Panel.

Keeping with Local Panels, Google also announced that businesses can add their own business descriptions. The custom descriptions, entered within Google My Business would appear within local Google properties such as Google Map results and of course the Local Panel.

Over the past two or so months Google has been pretty consistent in updating its image SERP. This pattern continued in March as Google added product tags to applicable images on mobile.

The new ‘Product’ label that appears on the Image SERP

Also on mobile, Google has added captions to the image SERP. I actually see this being a bit helpful in helping users discern which image most aligns to their needs as the caption, as is the inherent nature of a caption, helps the user translate what they are looking at.

Last, but not at all least, Google ran a test where they showed the answers
within the People Also Ask tabs/boxes. Usually, the way the Related Questions feature works is you see a question and have to expand the tab to gain access to the answer. When this happens you get what is all but a Featured Snippet, link and all. In our case here, where Google threw the answer into the tab itself there is no need (or less of a need) for further expansion and subsequently less visibility for the links found within those tabs. 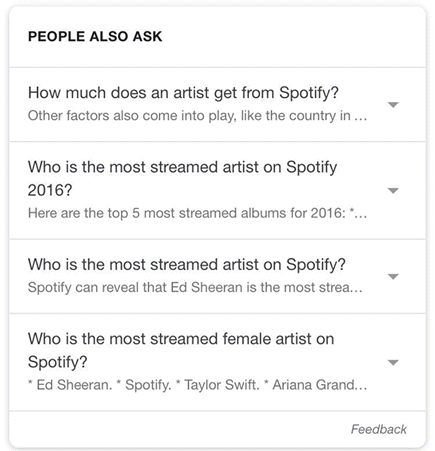 Along these lines, Google also tested expandable SiteLinks (mobile) that included a snippet of information that better qualified what is found on each of the pages shown within the “links.” 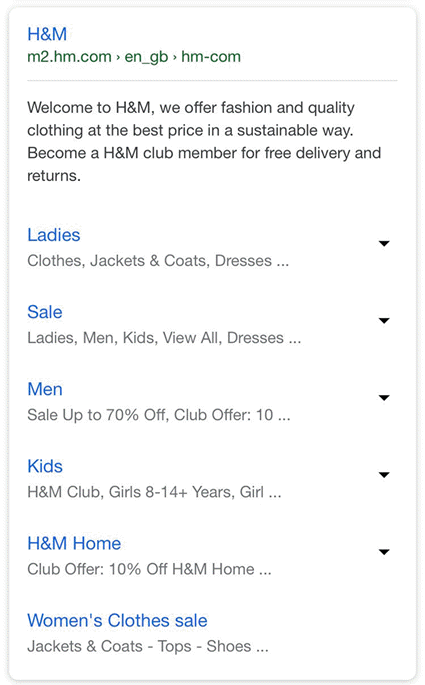 Something in the Air Tonight?

Partnering with BreezoMeter, Google will not show you the air quality of major (and perhaps some not so major) cities around the world. The information is presented on a sliding scale spectrum and includes “health recommendations” based upon the rating shown. 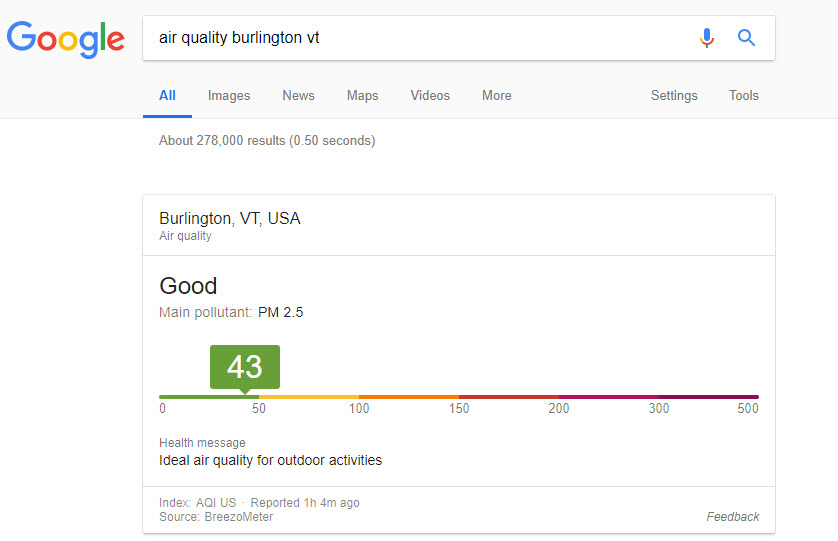 I would imagine, that as a Direct Answer Box, this falls into the category of really nice for users (I personally love this feature) but not so great for sites who offer this sort of information.

Eye on the Ball – Stay Focused 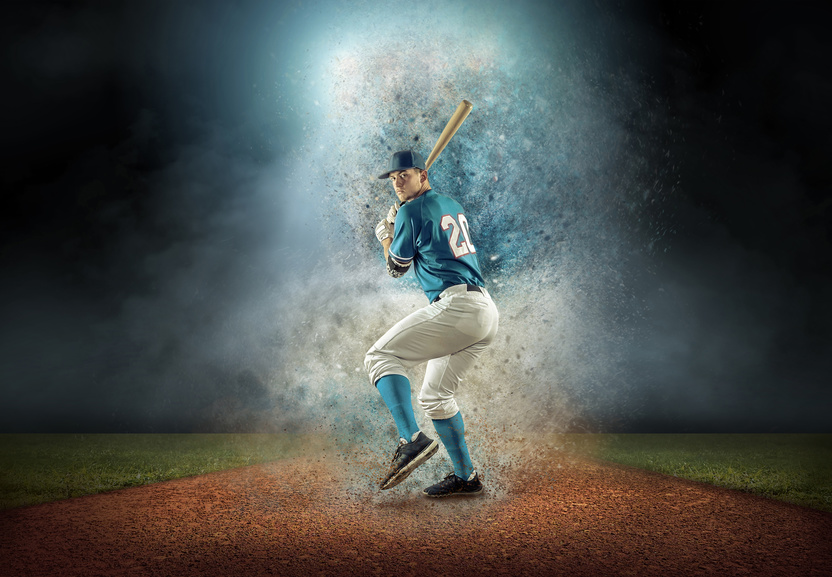 It would be easy to get swept up in March’s marquee stories. However, don’t lose sight of the big picture. Multi-faceted Featured Snippets are a response to Bing’s multiple answer
snippets, and indicates that Google considers Microsoft’s AI efforts to be substantial. They also point towards Google possibly addressing Featured Snippet accuracy (or lack thereof), which is, of course, significant vis a
vis the search engine’s voice search aspirations. It’s like they tell you when you’re a kid first learning to play baseball… keep your eye on the ball.

As always thank you for joining me on my tour through the SERP. If you have any questions or notice anything interesting on the SERP, I would love to hear from you, simply reach out to me on Twitter.