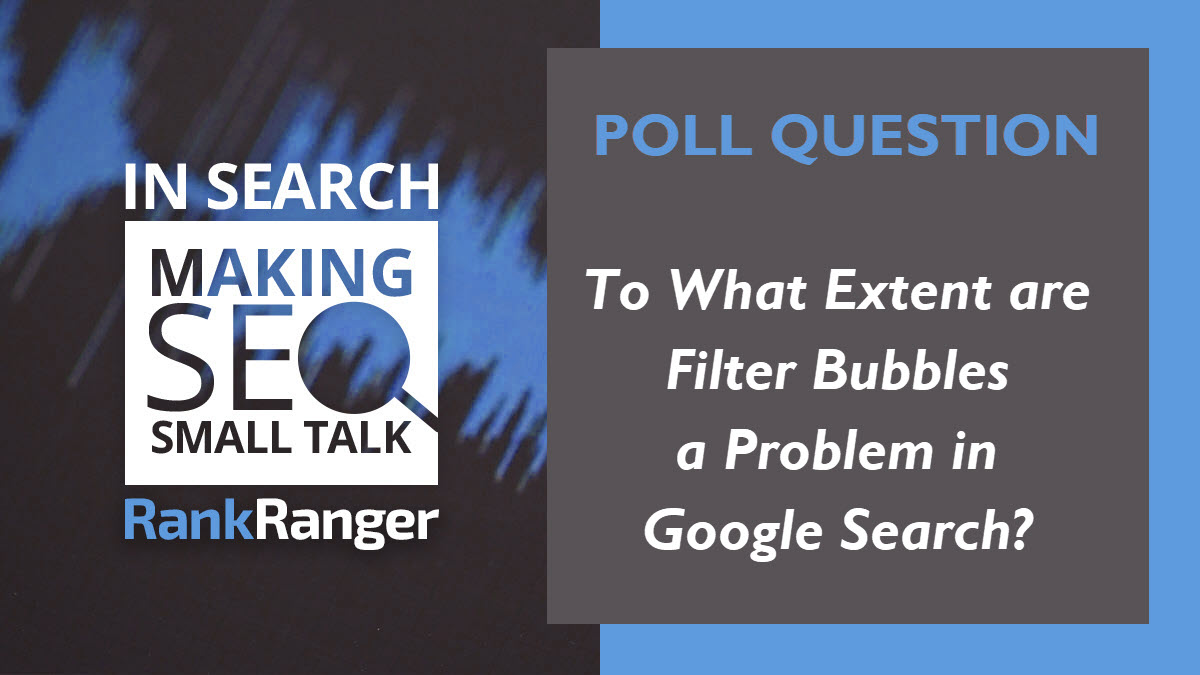 Let us know what you think about Google’s filter bubble. Does it exist? How big of a problem is it? Let us know so that we can feature you on the next episode of In Search!


Summary of Episode 07 of The In Search SEO Podcast 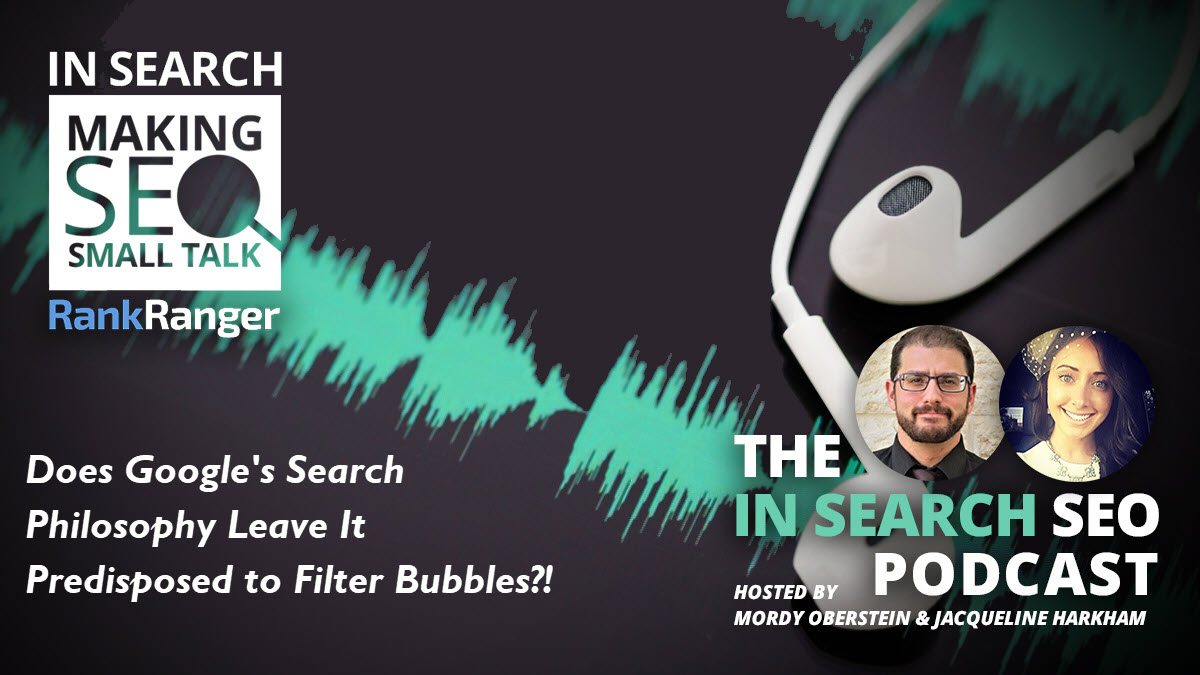 Google Ads and PLAs Disappear from the Face of the SERP!

Despite it being the heart of the holiday shopping season, our SERP Feature Tracker has recorded an enormous decrease in both Google Ads and PLAs! The dip was seen both on desktop and mobile (though to a lesser extent in some instances) and impacted markets around the world. Starting around December 3rd we recorded Google Ad losses of 70% in the US and 40% in the UK on
. On mobile, we tracked markets like Sweden showing a 27% loss while Turkey posted a 34% Google Ad decrease. PLAs took an even bigger blow with an 80% loss in the UK, an 83% loss in Canada, and a 40% loss in the US (desktop). The same was seen on mobile as markets such as Germany, Norway, and the US posted an over 40% PLA loss.

At the time of the podcast’s recording, we did see both ads and PLAs regain some of their losses. For example, on
in the US, we saw Google Ads bounce back to showing on 21% of page one SERPs, up from just 9% (though still not near their “normal” 35% showing). PLAs also saw a bounce back, but a far more minimal one. Take desktop in the US again. Here we saw PLAs dive from showing on 16% of page one SERPs to just 4.3%. In the days that followed PLAs have “bounced back” to a 5.5% SERP showing.

Getting the Real Story on Google’s Filter Bubbles

The search engine, DuckDuckGo, released a study indicating that Google’s “filter bubble” exists and is pervasive. For those of you not familiar, the “filter bubble” refers to an over-personalization of search results. It is alleged that when a user shows a search pattern that indicates the user is interested in a certain view or angle on a topic, Google will show results for subsequent queries related to that topic that would consider that “slant.”

Mordy took up the topic from two perspectives: Google’s handling of the controversy as well as why Google’s search philosophy leads to the possibility of filter bubbles.

On the former, Mordy was a bit critical of the way Google handled the claims made against it. To be fair, Mordy was also critical of the timing of the study as it was released but a week before Google goes to the US Congress to discuss this very issue (meaning, this was not a purely altruistic offering by DuckDuckGo). That said, Google, in Mordy’s opinion, was a bit too defensive in how it responded. He cited an article from SERoundtable comparing how Google dealt with the recent claims to how it handled the very same topic under Matt Cutt’s watch. Mordy noted that back in 2011, Google took a more “educational” approach, trying to explain its position and thereby letting the reader make an informed decision about the issue. Fast forward to 2018, and as Mordy was apt to point out, Google takes a far more aggressive approach, trying to both delegitimize the DuckDuckGo study as well as show that the privacy-oriented search engine falls into the same trap it accused Google of. The point our host was trying to make was that such an aggressive approach doesn’t help Google’s case. Whether Google is in the right or the wrong, coming off as hyper-defensive can present an optic of guilt.

As to how we got to this point where Google has been called out on the issue, not just by DuckDuckGo, but by Congress themselves, Mordy is of the opinion that Google’s very search philosophy predisposes it to such allegations. In his opinion, and per its 20th-anniversary announcements, Google has adopted a new search philosophy, that of search as a journey. The search as a journey philosophy is one geared towards guiding the user in a certain
so that the user finds what they want in order that they end up where they want to ultimately go. With such a philosophy it is not a big jump to the ‘filter bubble’ issue, as if Google is not careful, this search philosophy naturally leads to them! This is in contrast to what Mordy coined as a “search as discovery philosophy.” Such a search philosophy aims to not to guide users on any journey, but to offer or to facilitate a user’s overall understanding of what is out there vis-a-vis a particular topic and the like. In our host’s personal opinion (one not reflective of where Rank Ranger stands on the issue in any way), the truth is somewhere in the middle with certain instances of filter bubbles existing, though probably not to the extent shown in the study. This as Mordy sees the possibility of a  filter bubble as being a natural consequence of Google moving away from a “search as discovery philosophy.” As an aside, Mordy mentioned that this is not to say that personalization is “bad.” Rather, personalization is a search necessity, it’s just a matter of search engines finding the right balance.

What Happens When Google’s Intent Parsing Goes Too Far?

Our hosts analyzed the SERP for the simple query of notebook since the search term produced:

The issue here is that the SERP, with its multiple meetings of intent, does not satisfy any one of them to a certain extent. That is, most users will need to refine their query if they want a reasonably broad look at the topic. For example, in many instances a user looking for The Notebook the movie would need to execute another search as the PLAs, Local Pack, Image Box, are totally irrelevant to that user.

Mordy had an interesting solution for Google. He recommends that Google align the SERP to multiple “strands of intent” but offer a large and visually noticeable carousel at the top that lets the user choose what they meant, sort of a larger and more pronounced Disambiguation Box that puts the user in the driver seat.

New Structured Data for Q&A Pages: Though having shown rich carousels for forum results for some time, Google has introduced Q&A structured data to make picking up forum answers easier. Currently, Google only shows a tease of each forum answer. This means that a click is still needed to get any content of real worth. Our hosts hope this will continue, otherwise, it would hamper a forum site’s traffic.

Google Posts Gets a Like Button: A “Like button” has been spotted in some Google Posts. This, by its very nature, brings the SERP feature closer to being a true social media element. With the shuttering of Google+ pending, we’ve seen a few instances of Google trying to gain some more social media foothold. While Google Posts are a great opportunity for brands, who are already starved and looking for some social media success, our hosts wondered if enough businesses are aware that the feature exists.

Local Packs Get a “Sold Here” indicator: In what looks to be a new feature, Google is showing what products a store offers within the Local Pack. As will be discussed later on, this is another instance of Google going “commerce” with many of its local SERP features.

Search Console Bugs Results in Image Search Data Gap: It appears a bug has resulted in a loss of some of Search Console’s image search data. How much data has been lost is still a bit of a mystery as Google has not quantified the gap.

Local Service Ads Hit Canada: Google is testing Local Service Ads for various vendor type in Vancouver, the first market to see the ad format outside of the US. One would have to speculate that Google will only bring this to more and more markets as time goes on.

Chrome 71 Released: Google releases Chrome version #71. With the new version comes what seems to be an end of Google ad properties on abusive sites. Google defines these as sites that aim to do harm, such as tricking users into handing over personal information. This makes a good deal of sense
why would Google want to show any of its properties on such sites? That said, and with all such initiatives ranging from the Chrome Ad Blocker to the mobile interstitial ad penalty, Google needs to walk a careful line in how it chooses to either prevent or show ads.

Google to Shelve Old Search Console Reports: As of December 13th users will only be able to make use of the new Search Console reports in many instances. Google says the reason behind the move is so that it no longer has to support what are for all intents and purposes duplicate reports.

Are We Heading Towards a Monetized Reserve With Google Program

In his article, Reserve With Google – Which Categories & Services are Eligible, local SEO guru Mike Blumenthal goes through which businesses are eligible for the program and which cannot partake of it. He also lists some of the larger companies expected to enter the program in the near future. More, Mike asks a very pointed question as to if Google will monetize the program in earnest? The question comes as we’ve seen more and more commerce elements added to “local” SERP features. The idea of a monetized Reserve With Google program fits in with a belief Mordy has long held, namely that Google is greatly interested in moving beyond ad revenue per se. According to him, this is why we have so many upgrades to Google Flights and hotel listings, as both are instances where Google can earn revenue outside of Google Ads or AdSense. The idea being, that as Google needs to filter more and more ads for quality purposes (Chrome 71 being case in point), Google wants to more heavily invest in other revenue sources. Monetizing the Reserve With Google program seems to be a natural next step. It’s not hard to imagine Google looking to charge either its participating software partners or the businesses themselves. Per Mordy, how hard is it to conceive of Google saying something like, “After X number of bookings, a business will incur a fee of Y for any further bookings made via the program.” Time will tell we guess!

Analyze the Value of Social Engagement
What The ‘Facebook Papers’ Reveal About The Social Network’s Advertising Business
9 Creative Ways to Grow Your Web Development Agency – Adlibweb
RIP Twitter Trending As Jack Dorsey Steps Down, And Some Vow To Leave Service For GETTR
Health & Wellness Advertising Tips To Drive Holiday Sales